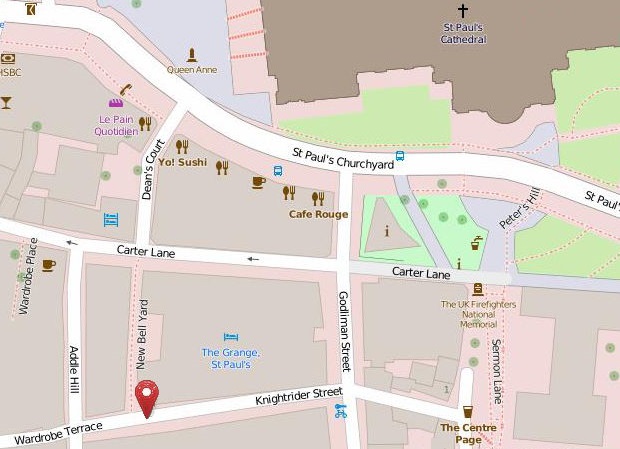 Doctors’ Commons, home to the London region’s civil law courts, was a collection of buildings located off Knightrider Street (so called because in olden times trains of mounted knights used to pass along it on their way from the Tower of London to the tournaments of Smithfield), close to St Paul’s Cathedral, and near the site of the Royal Wardrobe, the former palace where ceremonial royal garments were stored. It was spread across two sites: Doctors’ Commons itself—a kind of college campus in miniature set in a little square, with three houses of residence and the grand hall, where its courtroom was based—and the Prerogative Will Office, where one might go to consult wills, some fifty yards further along the road.

The courtroom played host to four different courts: the Court of Arches (the ecclesiastical court), the Prerogative Court (which dealt with matters of probate), the Consistory Court of the Bishop of London, and the High Court of Admiralty (responsible for cases of piracy, ships running foul of each other, and salvage, amongst other things). The first three of these courts concerned themselves solely with civil law (as opposed to common law—laws passed by Acts of Parliament—despite the word “common” in the College’s title). Civil law grew out of the bewildering system of church (ecclesiastical) courts—archiepiscopal, episcopal, decanal, sub-decanal, prebendal, rectorial, vicarial, and manorial, to name but a few—and covered such matters as defamation, blasphemy, sacrilege, apostasy, usury, adultery, partial or entire divorce, contracts, and probate—the proving of wills. 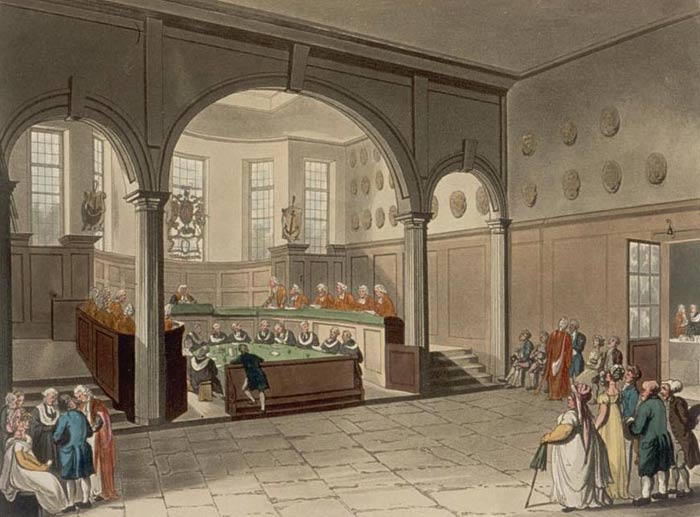 The courtroom of Doctors’ Commons [PD]

In this picture you can see the Court of Arches in session. The proctors, dressed in ermine and black (the civilian equivalent of solicitors), are seated about the lower table. The advocates, in ermine and scarlet (the civilian equivalent of barristers), face each other across the divide. The judge looks on impartially. There’s no witness box because no witnesses will be called. Both sides will have taken any witness depositions they deemed necessary and will present these in evidence instead. There’s no jury, for the judge will decide the case—nor is there a prisoner’s dock, for these are not criminal proceedings. In the picture below, you can see the hall from a different angle. Those plaques on the wall are the coats of arms of all the College’s Doctors of Law for the past century or so. That thing in the mid-foreground that looks a bit like a statue plinth is in fact a stove. During winter, it would be lit to heat the room. Here proctors and advocates would come to relax and socialize if they weren’t currently involved in a case. In his novel David Copperfield, Charles Dickens described the place rather aptly as a “cosey, dosey, old-fashioned, time-forgotten, sleepy-headed little family party”. 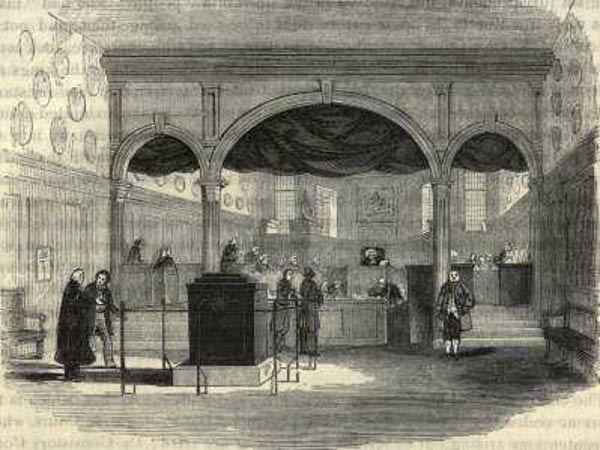 The Hall of Doctors’ Commons [PD]

etween the years 1827 and 1829 the Court of Arches dealt with a mere thirty-eight cases: twenty-one of divorce, one of defamation, four of brawling, five of church smiting(!), one of church rail(!!!), one of legacy, one of unpaid tithes, and four of correction (though correction of what, I have no idea). Seventeen of these were appeals from lesser courts (yes, the archiepiscopal, episcopal, decanal, etc., etc.). It’s fairly clear that by this point the Court of Arches was hardly overworked. So how did the College make its money?

The answer is simple: by the proving of wills. Ordinary solicitors and barristers at this time could not practise civil law, of which probate was a part; the only men who could were those who had trained as proctors and advocates. Additionally, the Bank of England refused to accept probate from anywhere other than the London-based Doctors’ Commons. Any will of value or importance from all over the country needed to be proved there or payments would be withheld by the bank. Probate had become Doctors’ Commons very own little cash cow.

The cosy, dozy hall of Doctors’ Commons was a far cry from the hustle and bustle of the Prerogative Will Office, however, where members of the public could pay their shilling to consult a copy of any given will (another cash-spinner for the College, for today that shilling would equate to approximately ten UK pounds). Here is a description of the office dating from 1843: 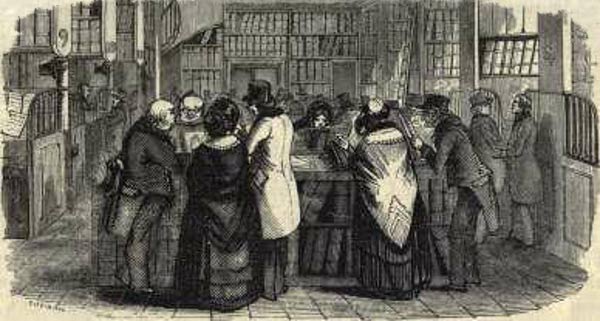 The Prerogative Will Office [PD]

“Persons are passing rapidly in and out the narrow court, their bustle alone disturbing the marked quiet of the neighbourhood. At the end of the court we ascend a few steps and open a door, when the scene exhibited in the engraving at the head of this paper is before us. At first all seems hurry and confusion, or at least as if every one had a great deal of work to do, in a very insufficient space of time. Rapidly from the top to the bottom of the page run the fingers of the solicitors’ clerks, as they turn over leaf after leaf of the bulky volumes they are examining at the desks in the centre, long practice having taught them to discover at a glance the object of their search; rapidly move to and fro those who are fetching from the shelves or carrying back to them the said volumes; rapidly glide the pens of the numerous copyists who are transcribing or making extracts from wills in all those little boxes along the sides of the room. But as we begin to look a little more closely into the densely packed occupants of the central space, we see persons whose air and manners, exhibit a striking difference to those around them: there is no misunderstanding that they are neither solicitors nor solicitors’ clerks acting for others, but parties whose own interests may be materially affected by the result of their search.”—from an article by J. Saunders, London, Volume 5, edited by the publisher Charles Knight (1843).

This monopoly on the proving of wills was not to last, however. People resented the expense and inconvenience of travelling up to London to seek probate on relatively minor wills. Doctors’ Commons responded by declaring that every registry in every diocese would from thenceforth be a branch of their own Court of Arches, where any will involving property up to the value of 300 shillings might be proved. Even this concession failed to stop the inevitable march of progress. In 1857, the Court of Probate Act gave ordinary solicitors an equal right to perform probate. The Matrimonial Causes Act of the same year whittled more of the powers away when it set up a divorce court where both advocates and solicitors could appear. 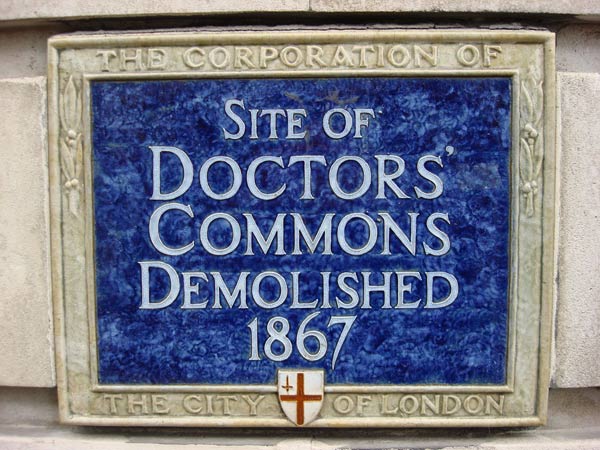 Times and attitudes were changing; the sentences these courts could mete out were becoming seen as archaic and inappropriate. As J. Saunders notes in 1843: “Almost the only criminal cases now brought before the ecclesiastical courts throughout England are those for defamation, generally of female character, and for brawling and smiting in churches, or places attached, as vestries. Penance for defamation [of character], though almost banished from the supreme courts here, is still in practice, it appears, in the country…but the ridicule and excitement caused by the appearance, in open church, of offenders in their white sheets, has caused the penance to be privately performed. The general method seems to be that described by Mr. John Kitson, the ‘Joint Principal Registrar’ of Norwich: the defamer makes retraction in church, ‘in the presence of the complainant and six or eight of her friends.’”

The relevance of Doctors’ Commons was now in question, and a motion was made to dissolve the College in January 1858, which they duly did in July 1865, before the premises were sold and demolished two years later.