THE CASE OF THE THROTTLED TRAGEDIENNE 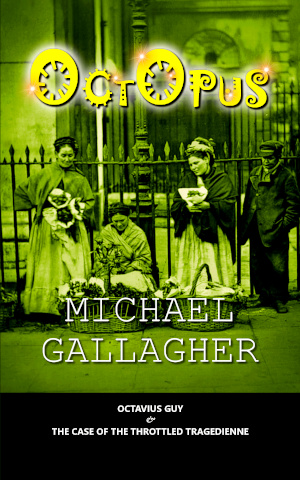 ‘“O fly your fate. Thou art a dead thing. Never see her more,”’ intoned Mr Bone, and, though he was murmuring these phrases under his breath, in the silence that had fallen in the auditorium we all heard every word.
‘What’s he on about?’ demanded Mr Willoughby.
Mr Bone looked at him and blinked. ‘They’re lines from later in the play, sir, that the duchess speaks from her grave. It seemed an appropriate tribute to the late Miss Prynn.’
‘The late—?’
‘Miss Isabella Prynn. She is dead, sir. She is dead.’

Join Octavius and his ragtag bunch of friends on their latest adventure, a revenge tragedy (of sorts) in (roughly—very roughly) three acts.

“Octopus is a scholarly murder mystery without being staid…those who enjoy television investigative series as varied as Leverage, Castle and Elementary will be delighted with this series and want to devour more. It is a masterpiece of misdirection and layers of creative storytelling. Trust me. Buy the books!”
—Dogsmom (Laura in Wisconsin), Amazon.com Reviewer

“Here is a sensational historical fiction who-dunnit that gives nothing away until the very end. To me, it reads like an old time radio show. It leaves you breathless.”
—Connie A., LibraryThing Early Reviewer

“The 'case' for our young investigator is darker and more complex this time, reminiscent of Sherlock Holmes, with twists and turns that sometimes rival Agatha Christie.”
—Anita Dow, Smashwords Reviewer

“Historical fact is deftly combined with fiction that makes Octavius’s world a new form of old London that I am eager to visit again. Pour some tea or a wee dram, put your feet up, and enjoy cover to cover.”
—Gladread, LibraryThing Early Reviewer

“Did I solve the puzzle - no, but I enjoyed every minute of Octopus’s investigations.”
—LizzieKillin (Liz Stevens), LibraryThing Early Reviewer

“What fun! The cast of characters is a wondrous mix of unlikely folks. Even a dog!”
—Libby Dodd, Goodreads Reviewer

“The characters are fantastic, they feel real, and the whole book just sucks you in from the first word. Everything about this book feels real, actually, and I had to keep reminding myself not to google for photographs of the characters. . .One of my favorite books this year, hands down.”
—LauraBrook, LibraryThing Early Reviewer

“Whenever I come into the middle of a series without reading the first book, I’m always a little fearful of being left confused. Not so with this book! The reader is given enough information to give them a good foundation for these characters without being bogged down by repetition. In fact, just enough detail is given that I WANT to go find the first book posthaste…A fantastic book for detective fans and lovers of the Victorian Era.”
—Bethany Swafford (The Quiet Reader), LibraryThing Early Reviewer

“This was a beautifully written book and played like a movie in my head. I could see, hear, and smell everything.”
—Beth McManus (alanbethcam), LibraryThing Early Reviewer

“If you like your mysteries on the cozy side and your characters loveable, read this book! You won't be disappointed.”
—Devon Lewis, LibraryThing Early Reviewer

Octopus: The Case of the Throttled Tragedienne
BUY NOW