THE CASE OF THE THIEVING MAHARAJAH 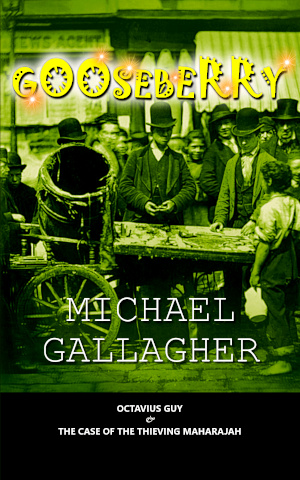 The time had come to own up to my past. I’d been thinking about how best to present it, and it seemed to me that what was called for here was a judicious mixture of remorse, honesty, and diffidence.
‘Though it shames me to say it,’ remorse, ‘there was no swifter, slipperier pickpocket in all of London,’ honesty, ‘than…well, me, miss—your humble servant—Octavius Guy.’ Diffidence dispensed in a generous measure.
Mrs Blake burst out laughing.
‘Please, Mrs Blake, it’s true.’
‘Gooseberry, you really mustn’t joke.’
‘I’m not joking, miss.’
‘I don’t believe it for a moment!’
Mr Bruff gave a cautious lawyer’s cough that managed to get everyone’s attention. ‘He’s telling the truth,’ he said quietly, and shot Mrs Blake a meaningful look.
‘But this is Gooseberry we’re talking about! Our Gooseberry! He’s no thief!’
‘If he’s telling us the truth, then I think he should be made to prove it,’ said Mr Blake, a mischievous grin breaking out on his face that even his thick, black beard couldn’t hide. ‘I propose a challenge. Gooseberry, come and try to pick my pocket!’
‘Please, sir—I don’t want to pick your pocket.’
‘But I insist,’ he said, stepping closer and closer till there was barely a foot between us. With everyone watching (save for the good Mr Bruff, whose features plainly registered his disapproval), Mr Blake leaned forward so that our noses were practically touching. On reflex, I found myself stumbling backwards, a move that Mr Blake took as a sign of defeat.
‘So much for the swiftest, slipperiest pickpocket in all of London,’ he laughed and, like a performer taking his curtain call, turned and bowed deeply to his wife.
‘Franklin, look,’ she advised him, pointing her finger at me.
Mr Blake looked. His mouth dropped open. He stared, blinking in amazement, at the silver cigarette case in my hand.

1852. With the business of the Moonstone diamond finally laid to rest, Mr Franklin Blake and his wife Rachel are now happily married, living in London, and blessed with a healthy baby daughter named Julia. Mr Blake has taken his late father’s seat in Parliament, and his party’s fortunes are on the rise—in fact they are about to overthrow the coalition government of the day.

But then the inexplicable occurs. Miss Rachel and her elderly aunt are attacked in the street by a gang of feral children, whose only purpose, it seems, is to plant a photographic portrait of a young, rich Indian lad in the old lady’s handbag.

Enter the Blakes’ lawyer’s office boy, Octavius Guy—better known as Gooseberry—who once helped the family bring the mystery of the Moonstone to a close. Join Gooseberry, the fourteen-year-old boy detective, as he and his ragtag bunch of friends descend into London’s Victorian demi-monde and underworld to ferret out the truth, while spending as much of his employer’s money as they can along the way!

Based on characters from Wilkie Collins’s The Moonstone. First published in 2014 as a weekly serialization on Goodreads.

"Sometimes you see a book and just know you're going to love it…An absolute treat for fans of Collins’ novel and a successful novel in its own right.”
—Emma Hamilton, buriedunderbooks.co.uk, LibraryThing Early Reviewer

“When you read a book by Michael Gallagher be prepared for a total immersion—every bit of scene setting, speech, character and historical detail is perfect. I highly recommend this book for fans of The Moonstone who wonder what happened next.”
—Chris Keen, LibraryThing Early Reviewer

“I was hooked from the start and spent as much time trying to guess the outcome as I did laughing out loud. I thoroughly enjoyed this novel and can't wait to read another of Mr. Gallagher's mysteries. Forget Sherlock Holmes, send for Octavius Guy!”
—Brittney L. Divine author, Smashwords Reviewer

“This is a wonderful, wholesome and satisfying read and I am already enjoying book two, with book 3 lined up and ready to start. What better indication of a 'must read' series is there?”
—Anita Dow, Smashwords Reviewer

“You immediately feel the dirt of the cobbles and dankness of the industrial revolution in the air.”
—Paul Blake, paulblakeauthor.com, Goodreads Reviewer

“What I particularly love about Mr Gallagher’s books is that they can be read and enjoyed by all ages. I have already lined up Gooseberry’s next adventure onto my Kindle.”
—Sausage, Amazon UK Reviewer

“This is an easy and thoroughly enjoyable read, with characters that become real in the minds eye, and a setting that evokes sounds and smells of how I imagine Victorian London to be. The story is told at a good pace, without unnecessary padding and with very good humour. I particularly enjoyed the cameo appearance of Prince Albert and the quirky personality given to him.”
—George Burman, 1pmchat.com, Amazon UK Reviewer

“...One of the most delightful things about Mr Gallagher’s books are the descriptions of the places and development of the characters. I can SEE the streets and places. I love the characters.
Octavius (Octopus, Gooseberry) helps solve a mystery involving a young Maharajah (kidnapped? missing?), the East India Company, the Kohinoor diamond, and various and sundry thieves, scoundrels and a few Royals. Total delightful mystery which moves along at a great pace. The only thing I didn't like is that I finished it too fast.”
—M M Plante, LibraryThing Early Reviewer

“...I absolutely loved it! The details and research Michael Gallagher has done to prepare for this book really shines through. I loved the characters (especially Bertha), and details about things like the Thames Tunnel, and the differences between the social classes of the time. Very well written and I am really looking forward to reading more books about Gooseberry!”
—Suzy Schettler, LibraryThing Early Reviewer

Gooseberry: Octavius Guy and the Case of the Thieving Maharajah
BUY NOW