St John Street (or St John’s Street Road—as it is referred to in the novel—for that how it is listed on a map I have which dates from 1852) is the long stretch of road that was the traditional route for herds of cattle coming into Smithfield from the north. Smithfield, or West Smithfield as it was sometimes called in order to distinguish it from an area to the east of Tower Hill, was an ancient market; St Bartholomew’s Priory, which lay to the east, held its annual Bartholomew Fair there (in addition to smaller, weekly ones) since 1133, but horses and cattle had been traded on the site long before this. It played host to medieval tournaments and public executions, and many a heretic or dissenter met their ends within its boundaries. Originally it covered approximately three acres of land; later this was extended to four. By 1834 it had become six, making it easily the largest livestock market in the world at that point in time. Here’s the description that Charles Dickens gave in his novel Oliver Twist:

“It was market morning. The ground was covered nearly ankle-deep with filth and mire; and a thick steam perpetually rising from the reeking bodies of the cattle, and mingling with the fog, which seemed to rest upon the chimney-tops, hung heavily above. All the pens in the centre of the large area, and as many temporary ones as could be crowded into the vacant space, were filled with sheep; and tied up to posts by the gutter-side were long lines of beasts and oxen three or four deep. Countrymen, butchers, drovers, hawkers, boys, thieves, idlers, and vagabonds of every low grade, were mingled together in a dense mass: the whistling of drovers, the barking of dogs, the bellowing and plunging of beasts, the bleating of sheep, and grunting and squeaking of pigs; the cries of hawkers, the shouts, oaths, and quarrelling on all sides, the ringing of bells, and the roar of voices that issued from every public-house; the crowding, pushing, driving, beating, whooping, and yelling: the hideous and discordant din that resounded from every corner of the market; and the unwashed, unshaven, squalid, and dirty figures constantly running to and fro, and bursting in and out of the throng, rendered it a stunning and bewildering scene which quite confused the senses.”—Charles Dickens, Oliver Twist. 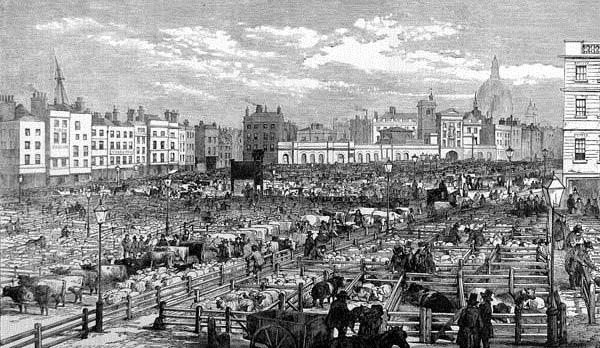 As the market grew in size, the industries it spawned in the local area—including St John Street—became ever more noxious. Eventually people had had enough. As the contemporary commentator, John Timbs, recalls:

“The market, with its attendant nuisances of knackers’ yards, tainted-sausage makers, slaughter-houses, tripe-dressers, cat’s-meat boilers, catgut-spinners, bone-houses, and other noxious trades, in the very heart of London, was, however, in 1852, condemned by law to be removed into Copenhagen Fields, Islington.”—John Timbs, Curiosities of London, published by Longmans, Green, Reader, and Dyer (1868). 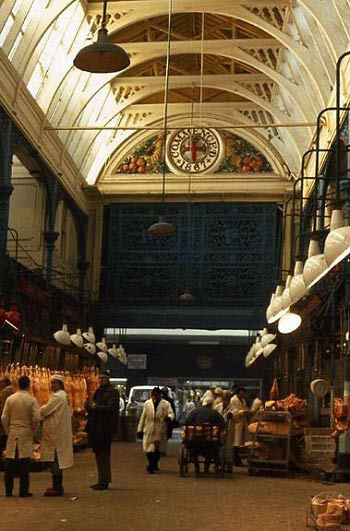 Readers may care to know that Copenhagen Fields (which no longer exist) lie a little to the north-west of Gooseberry and Julius’s lodgings, approximately a twenty-minute walk away. When the livestock market transferred there in 1855, it would have put a stop to cattle being herded past their building. Smithfield survived by reinventing itself as a meat market. Eagled-eyed readers may have spotted that I borrowed heavily from the above extract when writing the passage where young Gooseberry makes his way from Doctors’ Commons along St John’s Street Road to Sadler’s Wells with the intention of interviewing the actor Mr Jacobs:

“Still heading north towards my ultimate goal of Sadler’s Wells, I passed holding pens and slaughterhouses, tripe-dressers and bone-boilers, cat’s meat dealers and cat-gut spinners, and boarded-up backyards that reeked of mace and rotting meat.”—Octopus.

Along the way he stops at each public house he encounters to question the pub’s landlord. The Old Red Lion, across from the gates of Sadler’s Wells, is the last pub that Gooseberry stops at. John Timbs again:

“Less than half a century ago, the Old Red Lion Tavern, in St. John-street-road, the existence of which dates as far back as 1415, stood almost alone; it is shown in the centre distance of Hogarth’s print of Evening. Several eminent persons frequented this house: among others, Thomson, the author of The Seasons; Dr. Johnson, and Oliver Goldsmith.”

It’s clear that Timbs has seen one of these prints, where the pub’s spacial relationship with the theatre suggests that it can only be the Old Red Lion. But, in this, Timbs was wrong. The print is simply a copy of Hogarth’s original painting (which Timbs has apparently not seen), and when the engravers made the plates, they omitted to reverse the image, so all the prints that were pulled from them are in fact mirrored copies. 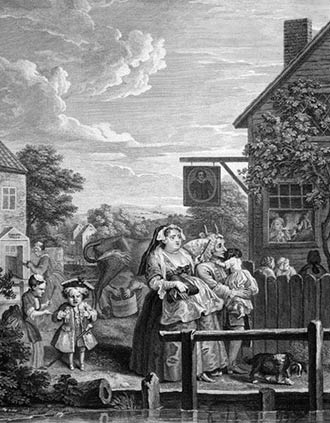 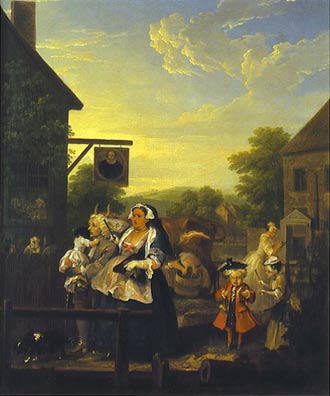 If you look at the original painting, the second incarnation of Sadler’s Wells Theatre can be seen on the right and the pub on the left is the Hugh Myddleton. It's Myddleton’s face that adorns the pub sign. We’re facing north; the family trudging homewards is heading west (towards the Gray’s Inn Road, not east towards the Old Red Lion); Goose Farm, The Old Red Lion, and St John’s Street Road lie out-of-frame to the right of the theatre. The country lane you can just about see stretching into the distance will later become Arlington Street, now known as Arlington Way.

It’s an easy mistake to make, and one which has been repeated on Wikipedia. Look up the Old Red Lion (which was rebuilt in 1899, and is today a wonderful old theatre pub), and you will see the same reversed print being offered as an image of how the pub used to look. 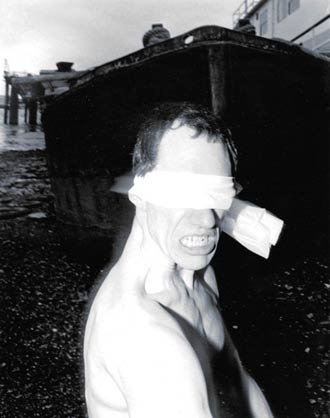 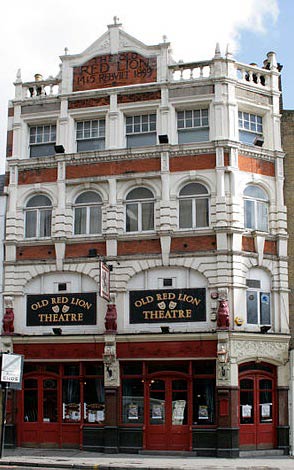 My friend, Tim Newton, once premièred a play he’d written in the late 1980s in its upstairs theatre. “The Ballad of the Limehouse Rat” was based on two accounts taken from Henry Mayhew’s seminal work London Labour and the London Poor. Tim gave a very physical performance, hefting around a huge docker’s hook blindfolded, right under the noses of the terrified audience—and I should point out that it’s a very intimate space, not much bigger than my own living room. After its run, he required physical therapy to recuperate.

“Opposite the Red Lion, and surrounded by pens for holding cattle on their way to Smithfield, was an old building called “Goose Farm;” it was let in suites of rooms: here lived Cawse, the painter; and in another suite, the mother and sister of Charles and Thomas Dibdin—the mother, a short, squab figure, came on among villagers and mobs at Sadler’s Wells Theatre, but, failing to get engaged, she died in Clerkenwell Poorhouse. Vincent de Cleve, nicknamed Polly de Cleve, for his prying qualities, who was treasurer of Sadler’s Wells for many years, occupied the second-floor rooms above the Dibdins. ‘Goose Yard,’ on the west of the road, serves to determine the site of the old farmhouse.” 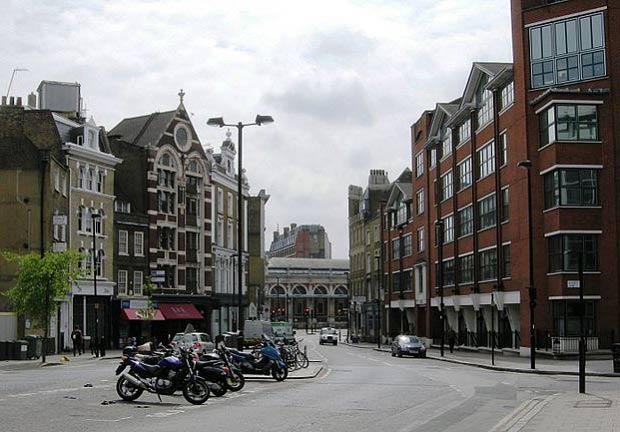 St John Street as it is today, photo by GrindtXX. License: CC BY-SA 4.0