THE CASE OF THE QUIBBLING CLERIC 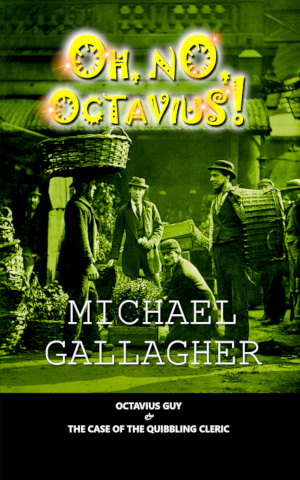 ‘“I can’t THINK without thinking about you; I can’t BREATHE without thinking about you; I can’t LIVE without thinking about you,”’ George quoted at me from memory. He narrowed his eyes and came straight to the point. ‘It looked like your handwriting, Octavius.’
It was; not that I was about to admit it.
‘Was it signed?’ I asked, knowing full well it was not.
‘No, but the writing was cursive like yours is, all spiky L’s and T’s. This is my little sister we’re talking about.’ He stressed the words little sister again and glowered at me some more.
Oh, why had Annie kept my note? Why had she hidden it where George was bound to find it? Surely she knew that her brother pried—if only where she was concerned? He was angry, very angry—anyone could see that—so angry that it was distracting him from the task in hand.
‘Concentrate, George. This is a crime scene, and we have precious few minutes before Mr Badger returns with all the constables of N-Division in tow. Come, observe whatever may be observed and tell me what you think.’
The big lad peered down at the body, which was sprawled across the aisle in the broad octagonal space where the transepts met the nave. Cool, early morning light filtered in through the church’s east windows, amply illuminating the corpse.
‘I think he’s dead,’ said George.

Praise for Oh, No, Octavius!

“This whole series would make a wonderful TV mystery drama for family prime time entertainment. If you like Agatha Christie and Sherlock Holmes, you will definitely enjoy this book and I wholeheartedly recommend it.”
—Anita Dow, Amazon UK Reviewer

“All his familiar trademarks - ingenious plot, brilliant characters and pitch-perfect dialogue - and is related with Gallagher's typical warmth and wit. His sense of the Victorian setting is superb.”
—Alasdair Muckersie, Smashwords Reviewer

“This series goes from strength to strength. While ostensibly a crime novel it manages to give a real strong sense of place and time and includes a wealth of fascinating social detail.”
—Mrs Buzzbead, Amazon UK Reviewer

“Village mysteries with lots of interesting characters who all have a motive are always a favourite of mine, and the excellent historical research (and notes at the end) makes it perfect for anyone who, like me, is also a history buff who loves a glimpse into how people lived in the past. This series just gets better and better.”
—Suzy Schettler, Goodreads Reviewer

“This series is a wonderful addition to any mystery lovers library. For fans of historical fiction, especially Charles Dickens, Wilkie Collins and Sherlock Holmes and their contemporaries and authors inspired by them. Not only is this a great mystery but a fabulous look at the times and conditions.”
—Dogsmom (Laura in Wisconsin), Goodreads Reviewer

“A more delightful and colorful set of characters is hard to find and you will enjoy Octavius's struggles with school, encountering a dreadful bully and attempting to conjugate Latin imperfect subjunctive verbs. The story unfolds in unexpected ways and Michael Gallagher will have you guessing the truth until the very last page.”
—Dee50, LibraryThing Early Reviewer

“For me as a reader it was exciting from the first to the last page.”
—Barbara Heckendorn, Goodreads Reviewer

Oh, No, Octavius!: The Case of the Quibbling Cleric
BUY NOW