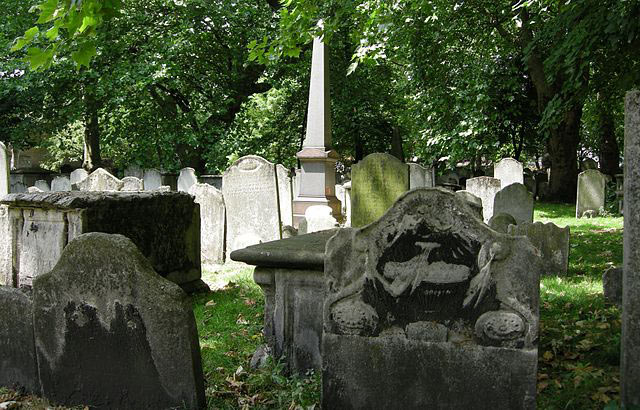 Bunhill Fields, the Nonconformist burial grounds that play an important part in Octopus, started life around the year 1100CE as one of three great fields beyond the city’s walls belonging to Finsbury Manor, which was then owned and administered by St Paul’s Cathedral. The name most probably derives from the time of Queen Elizabeth I, when the charnel house of old St Paul’s was demolished and the authorities needed somewhere to put all the bones. More than a thousand cartloads were disposed of in that marshy field, giving rise to the name Bone Hill, or Bunhill.

At some point the land was made over to the City of London, which, in 1661, leased Bunhill Fields to a certain Mr Tindal for a period of fifty-one years. According to John Timbs:

“...in that lease they are described as meadow-land, and the lease contains a provision for the citizens using them for recreation. Both this provision and the description of the land are at direct variance with its having been used as a place of burial up to that date. In four years afterwards, however (1665), London was visited with the Great Plague, and in the next year with the Great Fire, and it is extremely probable that in the disturbance of social order which these two visitations caused, the living sought for their dead a burial-place outside the City, and found it at Bunhill-fields. Certain it is, that before the expiration of Tindal’s lease it had become a burial-ground. As such, however, the Corporation had nothing to do with it, until the year 1788, when they determined not to renew the lease, but take it into their own hands, and so it has remained to this day.”—John Timbs, Curiosities of London, published by Longmans, Green, Reader, and Dyer (1868).

It’s unclear just who re-purposed the land for burials—Tindal? Or the City of London?—but there’s an inscription on the east gate that follows the wording of an original 17th Century one, which suggests that the City of London certainly had a hand in it—and well before the expiry of Tindal’s original lease: “This church-yard was inclosed with a brick wall at the sole charges of the City of London, in the mayoralty of Sir John Lawrence, Knt., Anno Domini 1665; and afterwards the gates thereof were built and finished in the mayoralty of Sir Thomas Bloudworth, Knt., Anno Domini, 1666.” Yet, even as late as 1746, it still went by the name “Tindal’s Burial Ground”; it’s listed as such on Rocque’s Map of London of the same year. 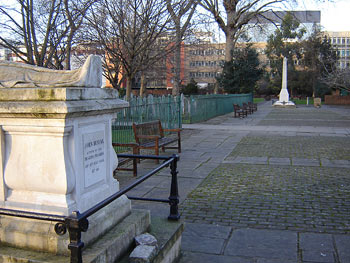 There’s one thing that Tindal—or the City of London, for that matter—singularly failed to do: they never had the land consecrated by the Church of England. It’s for this reason the grounds became the resting place of preference for Nonconformists, and more so after John Bunyan, author of The Pilgrim’s Progress, was buried there in 1688. Timbs again:

“Southey tells us, with grave humour, ‘People like to be buried in company, and in good company. The Dissenters regarded Bunhill Fields’ Burial-ground as their Campo Santo, and especially for Bunyan’s sake. It is said that many have made it their desire to be interred as near as possible to the spot where his remains are deposited.’”

Three other luminaries of literature were also buried there: Thomas Hardy, William Blake, and Daniel Defoe. Timbs tells us:

“Defoe, the author of Robinson Crusoe, who was born and died in the parish of St. Giles, Cripplegate, is buried in Bunhill-fields, with his second wife, the spot unknown. The entry in the register, written, probably, by some ignorant person who made a strange blunder of his name, is as follows :— ‘1731, April 26. Mr. Dubow, Cripple-gate.’”

This is at odds with the Wikipedia entry for Bunhill Fields, which states:

“Daniel Defoe, author of Robinson Crusoe, died in April 1731 and was buried in Bunhill Fields: his wife, Mary, died in December 1732 and was laid to rest beside him. His daughter-in-law was also buried in the same grave. Defoe died in poverty, and the grave was marked with a simple headstone. In the winter of 1857/8 – at a time when the burial ground was closed and neglected – the grave was struck by lightning and the headstone broken.”

Whichever is the case, Defoe’s imposing memorial does not mark the spot where he was buried; nor—until August 12th 2018, when two Blake enthusiasts saw their years of detective work come to fruition—did Blake’s headstone. In fact, the monuments to Defoe, Bunyan and Blake were all completed after Bunhill Fields closed as a burial ground in early January 1854. In the mid-1960s, a number of headstones and monuments were cleared away and the site landscaped as public gardens. 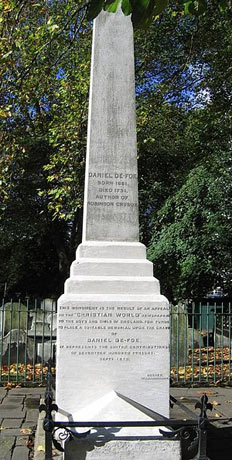 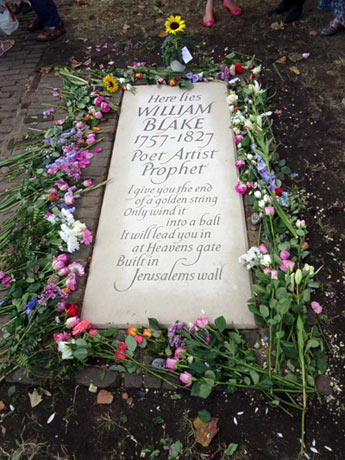 Readers of Gooseberry (or, for that matter, The Moonstone) will be aware that one of the characters in the novel holds Defoe’s Robinson Crusoe in reverential esteem. I was sorely tempted to include him in the burial scene, wandering around in the background, hunting for Defoe’s grave. In the event, there were already too many strands to the story, so I cut the scene from the final edit. For anyone, like me, who thinks that Gabriel Betteredge would surely pay Defoe’s grave a visit, here it is. I warn you, though—the ravages of age and drink have begun to take their toll:

By the wall, a figure shuffled between the graves, bending with difficulty to examine one headstone and then another. The stoop of the man’s shoulders and the broadness of his back seemed familiar to me. Naturally I went to investigate.

‘Mr Betteredge, sir, is that you?’
‘Eh?’ The old man glanced up from where he was kneeling. It was some months since I’d seen him last, and time had not been kind. His hair was unkempt, his face was puffy, and his skin shone with film of cold sweat.
‘But surely you are Mr Betteredge, Mr Blake’s household steward.’
‘Eh?’
‘Sir, what are you doing here?’ I didn’t imagine he had come for the funeral.
‘He’s here somewhere,’ he muttered, looking this way and that, but without really focusing. His eyes were glistening and his hands were trembling, to the point where I thought he might be having a seizure.
‘Who’s here, sir?’
‘Why, the greatest proponent of the English language. A prophet, sir; a prophet!’
‘Mr Defoe?’ I hazarded to guess.
A look of pure transcendence descended on his face. ‘Yes,’ he sighed. ‘The man who wrote Robinson Crusoe.’
‘Does your daughter know you’re here, sir?’
‘My daughter?’
‘Miss Penelope.’
‘My daughter?’ he said again.
‘Why don’t you come along with me, sir. I have a cab waiting at the gates to take you home.’