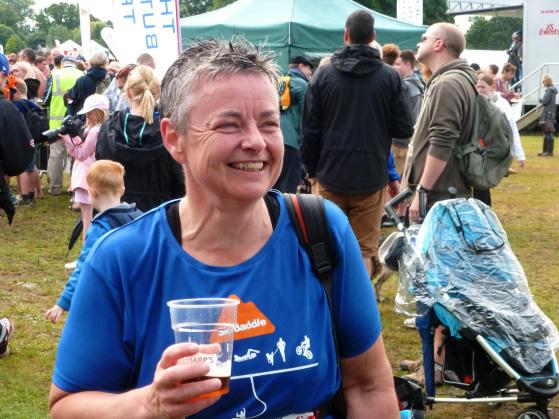 You may know her from the fabulous pics she regularly posts of her morning walks, but here's something you won't know: Liz has been reading and reviewing my novels since she requested a copy of Octopus from LibraryThing back in 2016. Many of you will have seen this video (made not long after), featuring a snippet of her review: "Did I solve the puzzle - no, but I enjoyed every minute of Octopus's investigations."

I felt honoured when Michael asked me to write something for his Fabulous Friends. I have been an avid fan of his writing for quite a while now and now eagerly await Octavius Guy’s tweets each morning.

It is difficult to focus on one part of my busy life, and yes I do work full time too before you read the rest of these meandering words. I get called Liz or Lizzie, Elizabeth is for formal stuff but NEVER call me Betty!

I have always enjoyed reading - my grandmother told me that before I went to school I was jealous of my older brother who was getting extra help with his reading. So she taught me to read before I went to infant school. I can never remember a time when I did not have at least one book on the go and, as a child on holiday on our canal boat, I was allowed to take a small case filled with books.

Canals were a big part of my life. Our first boat was purchased when I was about 4, then we got a bigger one that enabled us to sleep on it more comfortably. We could take this on a trailer which meant we could go to waterways that we would not have been able to get to on a normally. When me and my brother got older, Dad bought a shell which he then fitted out and put an old Ford Anglia 503E engine in. This was the last boat I holidayed on but my parents then went to a steel narrowboat. I spent weekends volunteering on the Stratford Canal - which was re-opened in 1964, I have shovelled concrete, built walls, cleared scrub, and had and many a bonfire on the banks of that canal. I have legged working boats through tunnels, and I even appeared on the bow of a boat in Stratford for the Russell Harty show. Canal life is great, and I know a lot of people with learning disabilities love it too.

Many of Michael’s followers will know me for my morning walk photos. Every work day I try to get up and walk a mile before I then spend the day in front of my computer for work. I like to take close ups and some more abstract ones and all with my phone.

Sometimes my posts include photos of my swimming pools – not the oblong, blue tiled, chlorine filled ones, but the natural lochs of Scotland (and occasionally a beach or tidal pool). I swim all year round in just a swimsuit (although socks and gloves go on in winter) and when I say swim, I mean swim – I am definitely not a dipper. I personally cannot see the point of just bobbing and faffing especially when we are breaking the ice to get in the water! I am not belittling it as I know that it helps a lot of people, but it is not for me.

I started swimming outdoors when my sister-in-law asked me to take part in a triathlon run by the Jenson Button Trust for CRUK back in 2015 and that involved swimming outside. We had to do the triathlon twice, and at the end of the first heat we were given half a pint of DoomBar. After the final round we got given a full pint. That first year I raised so much money that I was invited to the MacLaren factory as a reward.

The before picture - Swim Loch Tay by Tayfitness Events. 3 did 3K me and the lady in the middle did 5K
Very choppy, drank most of the Loch #lovewhereyoulive pic.twitter.com/umR28Ixi1O

I initially started swimming in the loch on my own, then got joined by a friend’s daughter and eventually more friends. Back then I remember us shivering as I drove back, but now I have built up quite a tolerance for the cold water. Every swim involves a mental risk assessment – try to swim into a current and let it bring you back when you are tired. I initially did wear a wetsuit, but as the time went by we would ditch it at the end of a swim, and swim a bit without it. Then we just gradually ditched them altogether. The freedom I feel without it is amazing, the soft cool water on my skin awakening the senses.

2015 was a big year for me. I ran my first 7K trail race, then a 10K, and then a 13.5K hill race. Then as a thank you for taking their wedding photos, my personal trainer at the time gave me an entry into a Half Marathon trail race from Kinlochleven to Fort William! 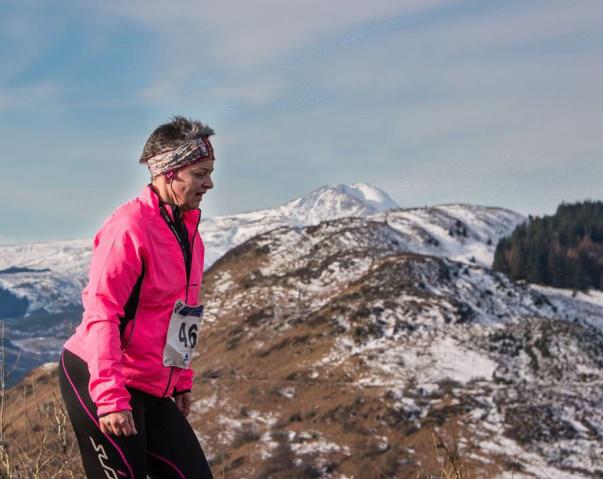 I did a few more runs, but decided it was not for me, and in recent years burst my plantar plate whilst on the treadmill and had to have an operation in 2020. It has stopped me running, although I did get a hand cycle for a few months whilst I could not do any other exercise – not easy when you live on a hill! My bike and swimming keep me motivated, with a bit of golf, kayaking and curling thrown in for good measure. I do need to get my fitness back, which I lost partly due to the injury.

I got involved in volunteering for sporting events doing 9 or 10 events a year in the local area to me. I also volunteer at Gleneagles for large (and smaller) golfing events – my collection of signed golf balls is growing.

So you might wonder how I have time for anything else? Drama! I have been involved in our local drama club since 1987, when we moved here. I started off making costumes for the dame in pantomime, then worked as a prompt for our spring play. Since then I have done sound, lighting, stage crew, directing, and acting, and now am stage director for our next pantomime in January.

We have had all sorts to deal with on stage. I have a reputation for being a drop cloth whisperer, as I can usually tame a reluctant drop cloth to roll back up into the stage ceiling. We have had all sorts of show stopping scenery to manipulate – from a magic beanstalk to a rotating cottage, we have had it – not bad for a wee village in rural Scotland! We enter one act play festivals most years, and in these I am usually on the sound desk – being a techie is just as nerve-wracking as acting, as a sound or a light going off or on in the wrong place can be more noticeable than any actor fluffing their lines! I have done sound for other groups, too, when they turn up with a CD (and if I am lucky a script marked with the cues) and then just leave me to it.

Sorry if it has been a bit of a ramble, and I have not even covered everything I get involved in – but I think I would need several reams of paper to do that.

Rainbow after the downpour at the end of our swim #lovewhereyoulive #rainbow #scottishweather pic.twitter.com/A494lv8lcc