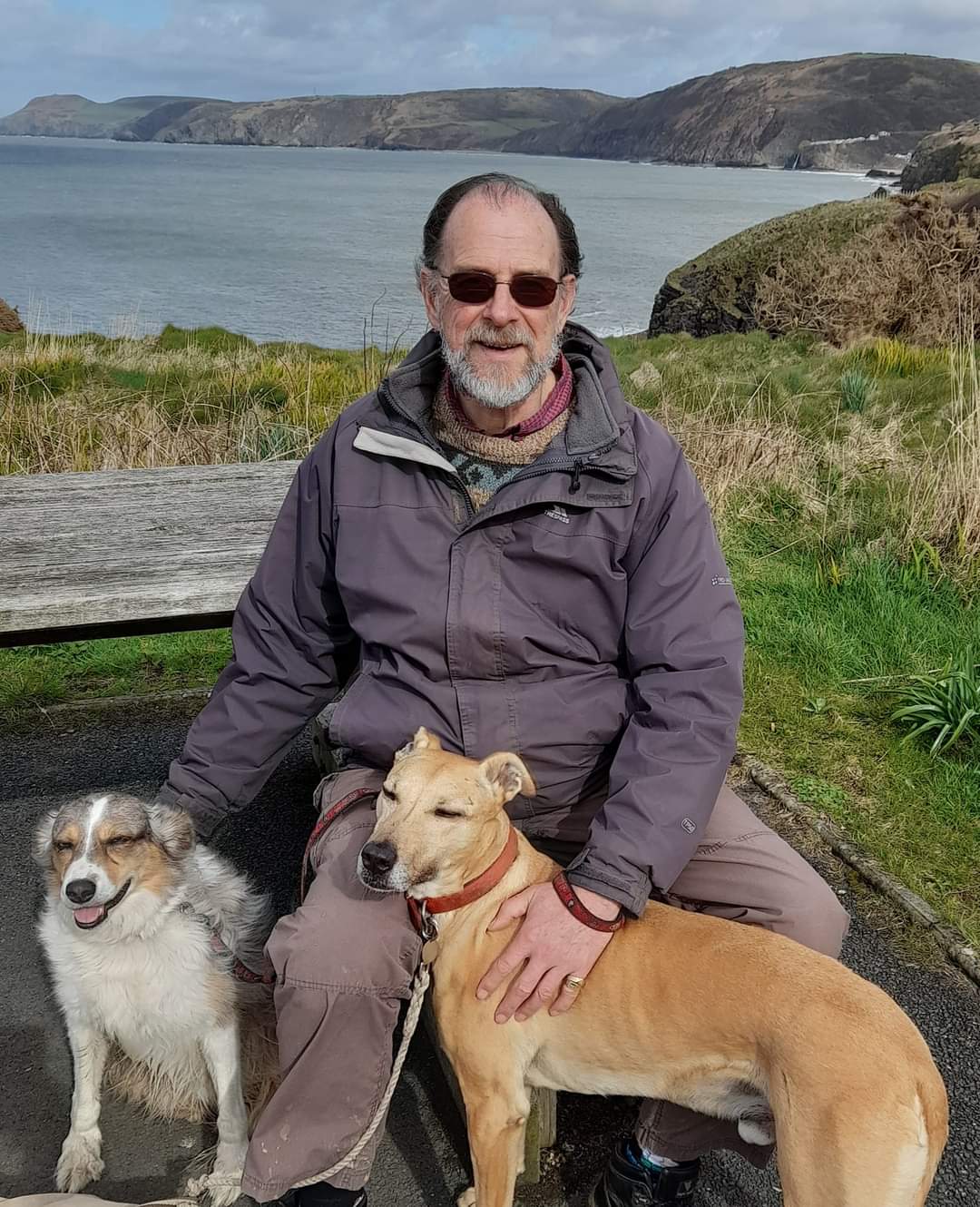 Robert's an actor and singer who has worked extensively in London's West End and in panto under his professional name Robert Traynor, though my favourite appellation by far is his Twitter handle, @BobTurnTray.

Robert has always been a vocal fan of my books, and though he doesn't talk about it here, he's also an animal charity worker. He and his partner have two beautiful dogs, Bryn and Skye, who must rank as some of the happiest hounds I've ever seen.

IT’S ALL YOUR FAULT, ERIC!

Catchy title. Not quite “Why Didn’t They Ask Evans” perhaps, but it will do. I’ll explain later.

My first professional engagement wasn’t singing or acting but was to play double bass at a local operatic society’s annual concert. At school we had the chance to join the choir and the orchestra. I say orchestra, but it was a weird combination of instruments we could learn to play. Goodness knows what we sounded like but I suspect we got complaints from nearby tom cats! I played bass. The Op Soc wanted to do a Swingle selection at the concert, at Bristol’s Colston Hall no less, and I got paid the princely sum of £5.

The actual Swingle Singers in their heyday

The musical director of the Op Soc asked if I’d like to join and, once I’d left school, I did. My first show was The Gondoliers in the early 1970s and I loved it. I did several shows and concerts with them over the next few years. I remember one concert we did with a local orchestra where the opening number was announced thusly by the band leader: “We will now play the overture to Dee Flying Mouse by Joan Strauss.”

I was having a lot of fun in the chorus but it occurred to me that it might be even more fun as a principal, so I asked our MD (musical director) to recommend a singing teacher, which he did. Things went well and I started getting more to do including a memorable gig as Il Pirato Rego in I Piratoj Di Penzanco, the Esperanto version of Pirates, as if you couldn’t guess. How did I get that job? No idea. I think I may have misunderstood a question.

I passed some exams and won a few local competitions until eventually my singing teacher said why not see if you can get into a music college. Friends, family and the MD all concurred so I took the exam and got into Guildhall School of Music.

Hard decision? Well, no. I was having a very bad day at work and suddenly saw myself ten years on at a bigger desk with bigger headaches wondering, “What would have happened if I’d gone to college.” I was lucky. I was a free agent and, in those heady days, was eligible for a Mature Student grant. If it didn’t work out, so be it. So off I went.

I remember my singing teacher at Guildhall was not keen on me playing rugby at weekends. His first words to me on a Monday were, “Good morning, Robert. Are you intact?” 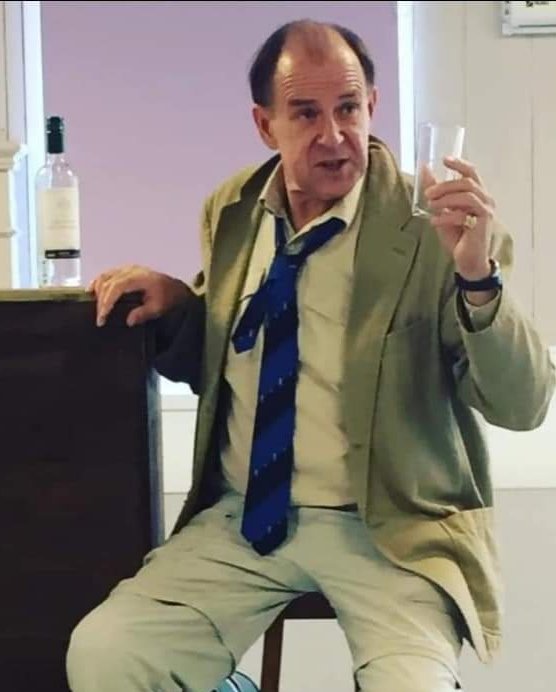 Time on the opera course at Birmingham School of Music followed. It’s gone up market since I left and is now The Royal Birmingham Conservatoire. There’s posh! In addition to roles in college productions, senior students were put up for paid gigs with choral societies and small scale opera around the West Midlands. As the grant had now run out, this was a very handy supplement to the fill-in jobs we all did. It also meant I was gaining experience and repertoire.

Then, in 1988, came the break. I got a job with the D’Oyly Carte Opera Company. Seventh heaven as G&S is my first love. As a kid Mum and Dad took me to Bristol Hippodrome to see them do The Mikado. I was hooked. My old MD was chuffed and, over the years, we did several fund raisers together for the society that got me started. 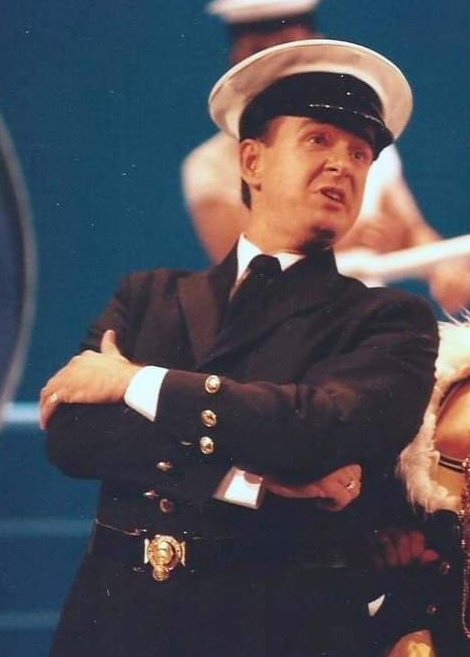 I spent the next eight years with them in ensemble and understudying low baritone roles, many of which I got to perform. I remember I was on for the first time as Sergeant Merryl in The Yeomen of the Guard. Merryl is plotting to save his Colonel from execution on a trumped up charge. They meet. What the Colonel should have said was, “My good and kind friend, thou runnest a grave risk for me.”

He must have had the wrong teeth in because what came out approximated to, “My good and fried Ken, thou grillest a gloved rusk for me.”

I didn’t dare catch his eye, but took a deep breath and carried on regardless. I didn’t buy a drink that night! Happy days.

Musicals followed as a sort of natural progression and I’ve done battle with some good ‘uns. South Pacific, Sweeney Todd, The Go Between, Lend me a Tenor, Scrooge, and Singin’ in the Rain. I played R F Simpson, the studio boss, and got my very favourite review ever:

“....and of Robert Traynor as RF, the least said, the soonest mended.”

I spent eighteen months in Chitty Chitty Bang Bang at the London Palladium and a further year on tour. I loved it. It’s a funny thing about theatres. Large or small, they all have their own character, some daunting, some welcoming. The Palladium is vast, yet the first time I went on to the stage there it felt warm and curiously intimate. If you’re looking for an explanation, I’m afraid I don’t have one. That’s just how it felt. 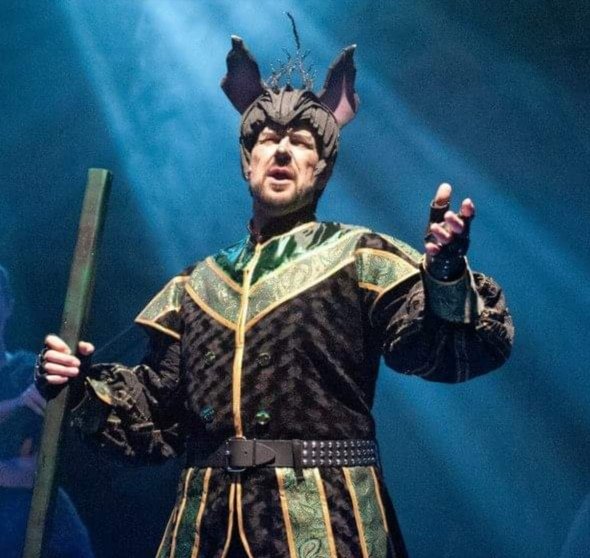 In Chitty I covered and then played Boris the Spy and together with my fellow spy, Goran, we can lay claim to an ad lib that may well now be in the script. During one of our scenes, a random dog was set to run across the stage in a hark back to the canine chaos at the end of the Toot Sweets number which preceded us. It was always an awkward moment and various lines were tried. Lamp posts and Barbara Woodhouse and Bob Martin figured. One night, said dog shot across on cue and Goran, slightly mischievously, said, “It looked like a Shitzu.”

To which I heard myself reply, “It was a fox terrier, and don’t call me Sue!”

Big laugh. “That stays in!” said our company manager as we came off. 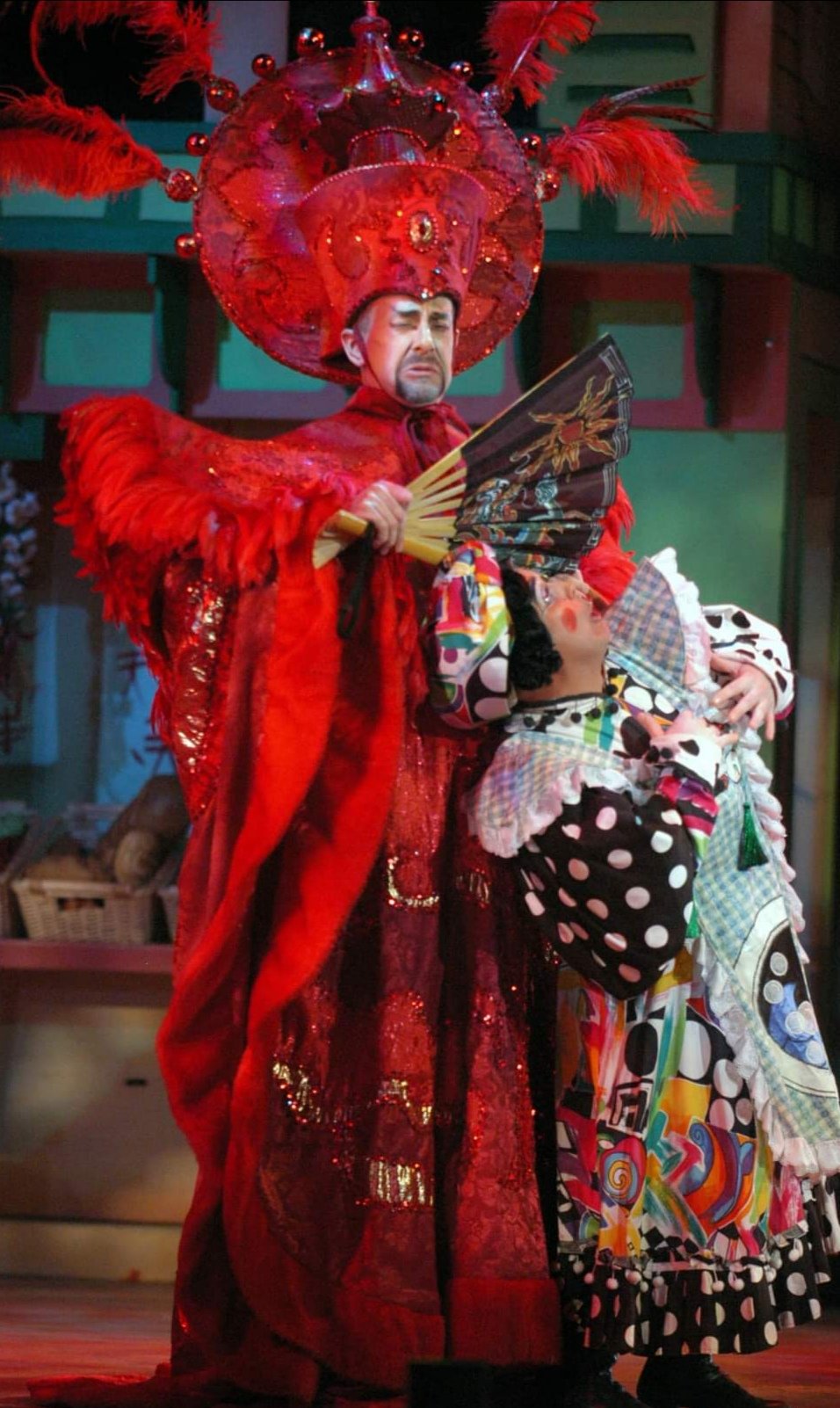 I’ve been lucky enough to have been involved in a variety of projects. Opera, musicals, plays, a bit of filming. Pantomime, which I adore, would fill another post in itself. Not always the easiest of professions, but I’ve had, and am still having, a lot of fun. Mind you, it has a way of keeping you grounded. The late John Inman, with whom I had the great pleasure of doing several pantos, told the story of an encounter at stage door in Blackpool. John was starring in Are You Being Served and was top of the bill in the summer show. He was confronted by a dour man, who thrust a programme at him saying,

John did so and asked if they’d enjoyed the show, and got this reply.

So, to explain the title of this story.

This all began at school and the Op Soc. The music teacher and the society's MD were one and the same person, namely Eric Davies. We remained friends and whenever we met he’d always ask for the ins and outs of what I’d been up to and I always finished with the words, “It’s all your fault, Eric!” 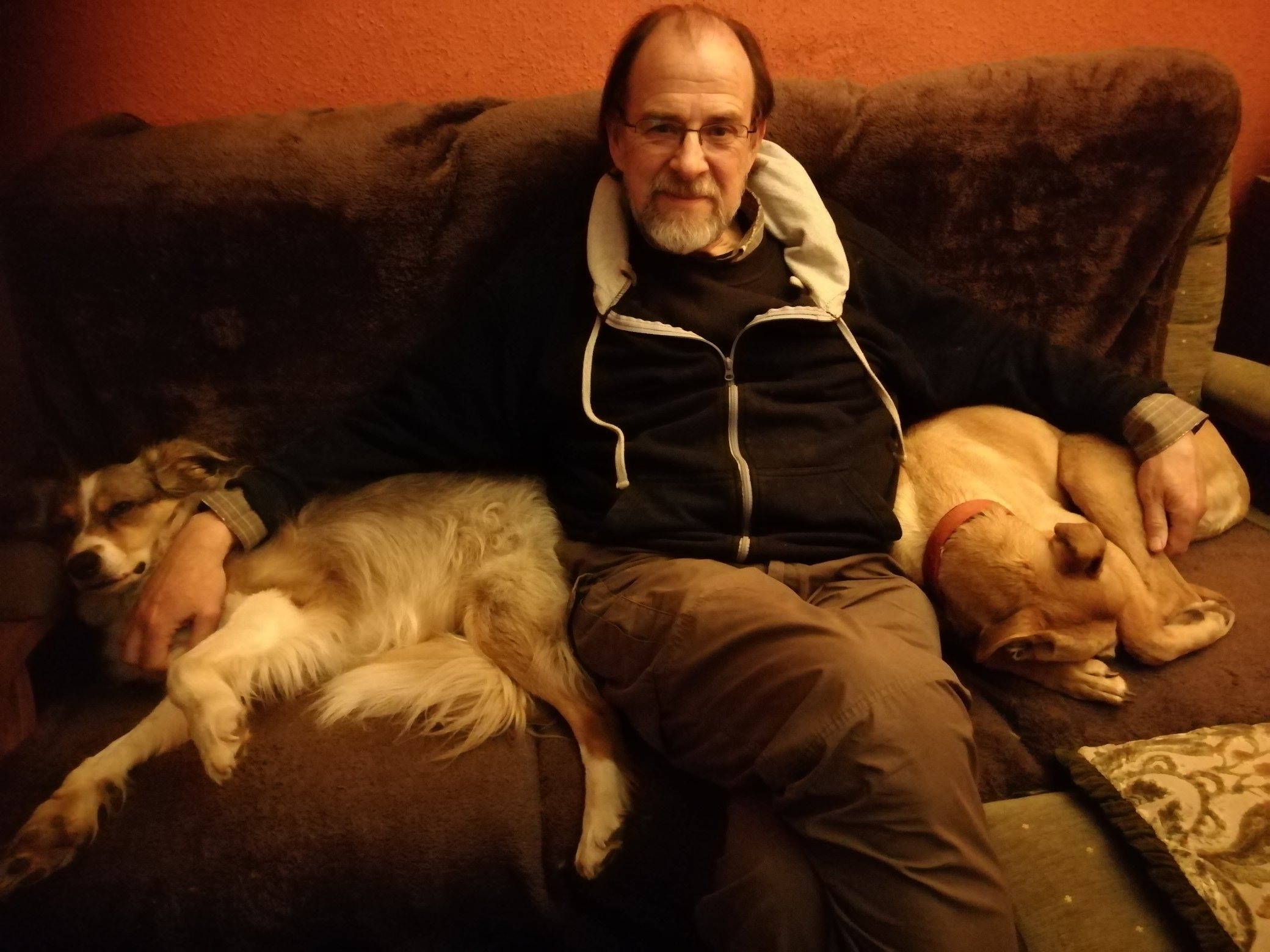