The Bridge of Dead Things mentions the history of the South African diamond rush from its beginnings with the appearance of the Eureka diamond, the first diamond ever to be discovered in South Africa. It was found in 1867 by a 15-year-old boy named Erasmus Jacobs, whose father owned a farm on the Orange River. He saw it on the riverbank and was attracted to its shine—but did not realize what it was. Neither did his mother. When a neighbouring farmer set eyes on it and offered to buy it, she gave it to him, telling him to keep it. As diamond fever began to take hold, people really did start tearing apart their own cottages in search of gems inside the baked-mud bricks. These were desperate times.

The Eureka diamond weighed 21.25 carats, approximately 4.25 grams in its rough state. But this was nothing compared to the Cullinan diamond, also known as “The Star of Africa”, which was dug from the Premier Mine on January 26th 1905. The Cullinan is the largest rough gem-quality diamond ever found, weighing in at 3,106.75 carats or 621.35 grams. 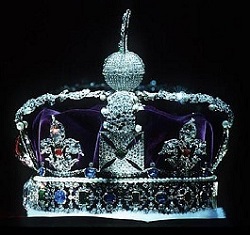 In its uncut state it was bought by the Transvaal government and presented to King Edward VII on his birthday. Sir William Crookes (yes! the scientist who championed the medium Florence Cook, whose story provided inspiration for my novel) was asked to perform an analysis of it before it was cut. He remarked on its dazzling clarity, but was troubled by a black spot at its heart, where the surrounding colours were especially vivid, which indicated that it had a serious flaw. He also noted that this enormous stone was simply a fragment—probably less than half—of a distorted, eight-sided crystal, and concluded that the remaining piece was still buried somewhere in the ground.

The Cullinan diamond was eventually split into three parts, and then these parts cut into nine large gem-quality stones and nearly a hundred more smaller fragments. The larger stones now form part of the UK’s Crown Jewels. When the initial split was made, the man who made it insisted he have two medical staff in attendance in case he fainted from the stress—a good thing too; he did!

On November 18th 2015, William Lamb, President and CEO of the Canadian-based Lucara Diamond Corporation, announced the discovery of a 1,109 carat gem-quality diamond at its Karowe mine, 300 miles to the north of Gaborone (which all Alexander McCall Smith readers will recognize as being the capital of Botswana). It is the second largest gem-quality diamond ever to be found, and has been named “Lesedi La Rona”, which means “our light” in Botswana’s Tswana language. The following day he announced two further finds: an 813 carat stone and a 374 carat stone. Even the smaller of the two is more than ten times the size of the Eureka. Lamb is quoted as saying that he is “truly at a loss for words”. I am quite sure that Mma Ramotswe would have something pertinent to say on the subject! In May 2016 Lucara sold the 813 carat stone, which they call “The Constellation”, to the Dubai-based diamond firm Nemesis International for UK£43.7 million (US$63 million) plus ten percent of any profits once the stone is eventually cut and polished, making it the most expensive rough gem to date. However, “Lesedi La Rona”, which goes on sale at Sotheby’s in London on June 29, 2016, is expected to top it. 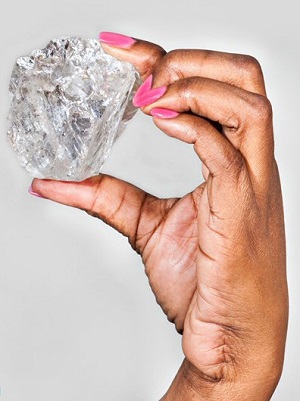 The story of the Rathook Mine which appears at the tail-end of The Bridge of Dead Things is based on the famous folktale Stone Soup, where a starving peasant (often embodied as some wily animal) takes a pot of water and an ordinary stone and pretends to make a delicious soup from them, encouraging his neighbours to add what they can: a few onions, some carrots, a handful of beans. Stone Soup ends happily with the whole village feasting together; as you may know, my story does not.