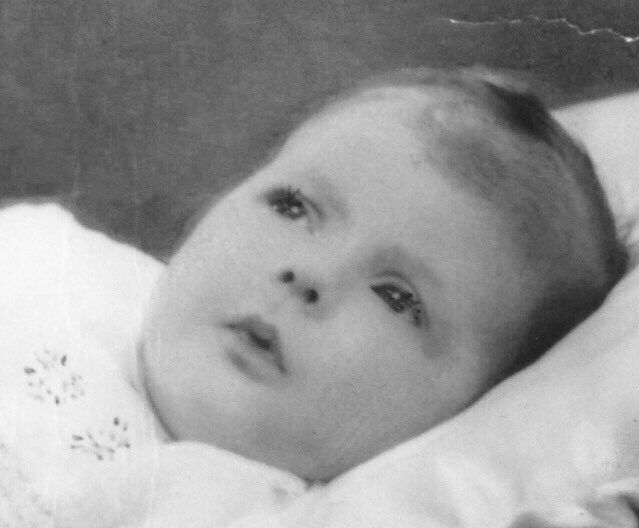 I first met Buzzbead on Twitter; we both followed M. R. C. Kasasian, author of The Mangle Street Murders. Martin hosted an excellent if chaotic account, which eventually proved too much for him, and sadly he shut it down. Though I'd made a few friends there, it's only Buzzbead who regularly keeps in touch. Whenever I read her tweets, I invariably picture her with a smile on her face.

Like Alasdair, Anup, and Anita before her, she is yet another of my readers to have read all my books, and I am thrilled she agreed to be July's Fabulous Friend.

Although my parents had known each other a long time, it’s said that my father declared he was going to marry my mother when he first clapped eyes on her at the tender age of eight (more of this family propensity for instant attraction later), they didn’t get around to it until their late 30s. I was born when my mother was in her late 40s and had all but given up hope.

I do think though that my mother should never have had a baby as, once I was past being cute, I always felt very much surplus to her requirements. Not so my father - and one my mother’s younger sisters however. My lovely aunt moved in with us when my mother went back to work full-time, when I was 18 months old, (unheard of in those days), and between the three of them working shifts they brought up baby with my aunt being more of a mother to me than my real mother. When they needed additional help, I was shipped off to my grandparents who lived close by.

My nana, about 4’6” and six stone wringing wet, was however a drinker, brought on allegedly by the death of her favourite son from meningitis at the end of the war. It seems to me that a lot of my mother’s family had addictive personalities, especially where alcohol was concerned. My nana was also a gambler, and I learnt, very early on, not to disturb her when she was bent over the kitchen table with the newspaper spread before her and her pencil in her hand, studying form. In hindsight my nana also had dementia (also unheard of in those days), and between that and the drink, life with her could be rather hair-raising. 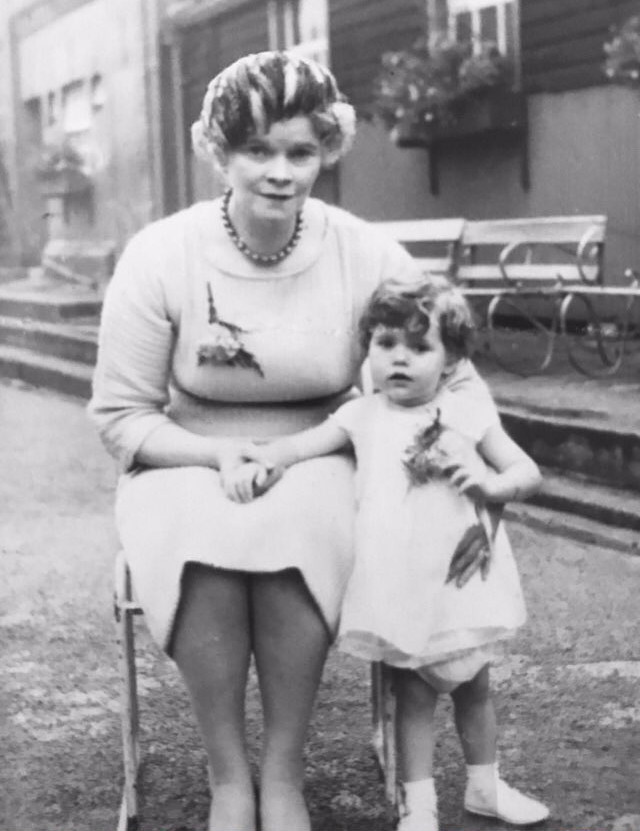 She talked to herself in the mirror all the time and often wandered off out leaving me home alone. My [grand]papa was still doing voluntary work at that time, probably to get away from my nana, and it was such a huge relief to me if he was at home when I arrived. According to my mother’s family he had been a very hard and strict man in his younger days, but I always remember him as one of the kindest men I knew. When I was seven, I was with him and my mum at the hospital when the doctor informed my mum that he had throat cancer and the three heart-breaking years that it took him to die are a huge part of my childhood memories.

We lived in a privately rented, falling-down house in a very poor area; in fact I thought council houses were incredibly posh. My father, a clever man but denied a proper education by family circumstances, was determined that no child of his would go to school with the local ‘ruffians’, so at the age of 3 I was packed off to a local convent. I have thought about this a lot. Going to that school but living where I did resulted in making me a misfit in both places. 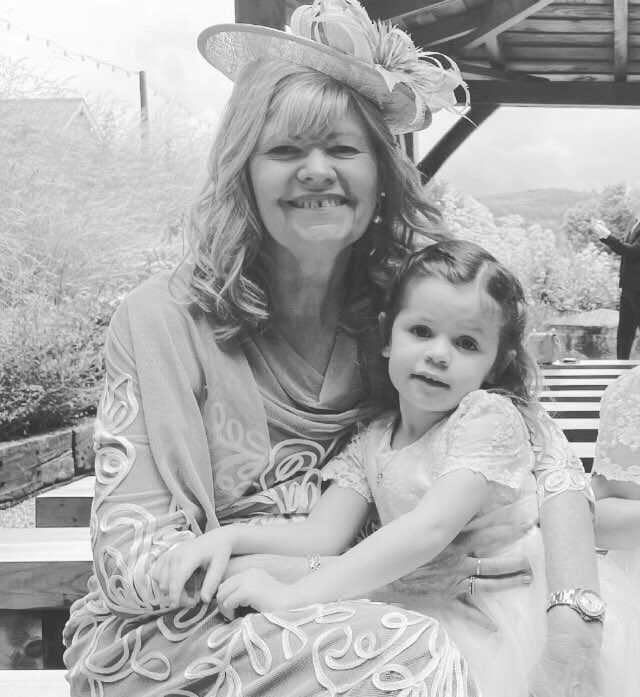 The local kids thought I was stuck-up and the kids at school - and the nuns especially - thought I was the ruffian. Combined with being an only child it’s not surprising that almost all I did was read. My mother was a voracious reader too and, when I was about five or six, a brand-new library was built almost on our doorstep. Under the watchful eye of a lovely librarian called Ken I worked my way through almost all the children’s books and at age 10 started in the adult section. Despite all this reading, with the exception of sport, I was bone idle at school, getting away on native cunning rather than any solid academic work.

Most of my time at home was spent reading, banging a tennis ball against the huge wall outside our house or playing hopscotch with the girls who lived at the pub over the road. When I was about nine, the pub landlord bought a caravan and he and his wife, who seemed incredibly young and trendy to me, were kind enough to take me away on holiday with them. This sounds quite low key but they didn’t just take the caravan to Pwllheli. I travelled Europe with them each year for a month at a time.

Our first venture was down to Spain, and I remember trying spaghetti bolognaise for the first time. Over the following years we spent time in France, Austria, Germany, Switzerland and my favourite place, Italy. Remember, four children in a saloon car (they also had a son), no car seats, no air-conditioning, no sat-nav or video games. Apparently, their daughters didn’t fight so much when I was with them, and as all the children were fussy eaters (whereas I ate anything and everything), I was considered a good influence on them. I think the nuns might have had something to say about that!

So, I stumbled my way through GCEs and took science A levels in 6th form because the science students breezed around school in lab coats, and I thought that looked really cool. Looking back over my life, my only regret is that I took the wrong A levels. I should have done French, English, History and Art. However, something much more important was on the horizon. Aged 15 in Lower Sixth, (I’d gone up to secondary school a year early), I met Mr B. 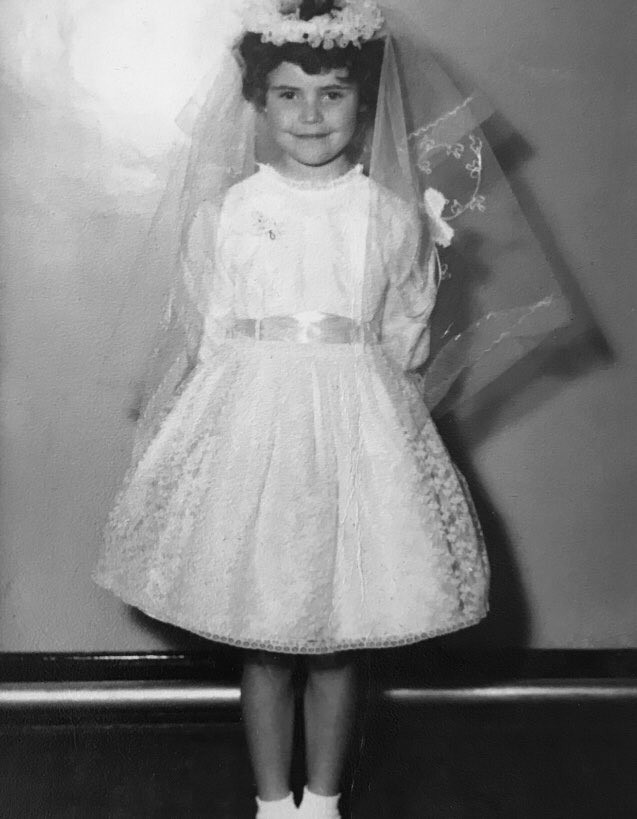 Some of the lads we hung around with from the local secondary school ran a mobile disco, and one Sunday afternoon as we were coming home from the stock car racing, they went to Mr B’s to borrow some speakers as theirs were broken. I didn’t get out of the car or speak to him but, just like my dad all those years ago, it was love at first sight. Being quite sure that this was really meant to be, it took me six weeks of determined sleuthing before I finally found out where to go so that our paths could ‘accidentally’ cross. I managed to get invited to a party at a local church hall that I knew Mr B would be attending. He arrived late, but then as I’d envisaged, he asked me to dance and we have never looked back.

I crawled through those despised A levels and despite having a place to go to university, I didn't go. We got married a year later and 10 months after that our first child was born.

Did you say there's curly kale and carrot peelings for breakfast? #rabbits pic.twitter.com/XjvmE9k4ER

I did eventually do some more suitable A levels at night school when the children were still small and then went to university to do a joint honours degree, where I made some wonderful friends. My tutors may have taught me English and History, but these fabulous friends (if I can steal that phase) taught me so much about life, and continue to do so. Following a PGCE, I taught for a few years but it was never something that I loved and so, when Mr B retired, we decided I would retire from teaching too.

However, after a few months of being a lady of leisure I was a bit bored and joined a temping agency and am still employed by one of the first places that took me on where I am a part-time PA, come finance manager, come dogsbody. I also do supply work for our local library service which I absolutely love. Books were after all my very first love.

I love cooking and eating too (my mum and dad were both fantastic cooks), and travelling. After that amazing start, travelling all over Europe with the caravan, I have been to a lot of countries. My most memorable trip was a hot-air balloon ride at daybreak over the Valley of the Kings...and the strangest was a camel trek in Marrakesh. For whatever reason, it was only me, the camel Alysha, and Ahmed the camel driver, and the only way we could communicate was in my Year 9 French. Talking of experiences, I am also proud to have been to a Buckingham Palace tea party in recognition of Mr B’s volunteer work...and I recently donated my 93rd pint of blood and I’m definitely aiming for a 100.

My greatest experience ever though was being present at the birth of my younger grandson. My daughter knew her husband was squeamish and mightn’t last the course of a prolonged labour and asked me would I go in with them. My daughter, a Virgo and hence ferociously organised, went into labour on the day the baby was due, exactly 9 months to the day after their wedding, and the baby was born early next morning. Because things played out quite dramatically at the moment of birth my grandson was passed immediately to me as his dad, fair dos, who was still standing, was busy with my daughter. I held the baby for about 15 minutes and in all that time we didn’t break eye contact once. I tease him now that, like a duckling, he was imprinting me for ever. This baby is now taking his GCSEs. Heavens, where did that time go? 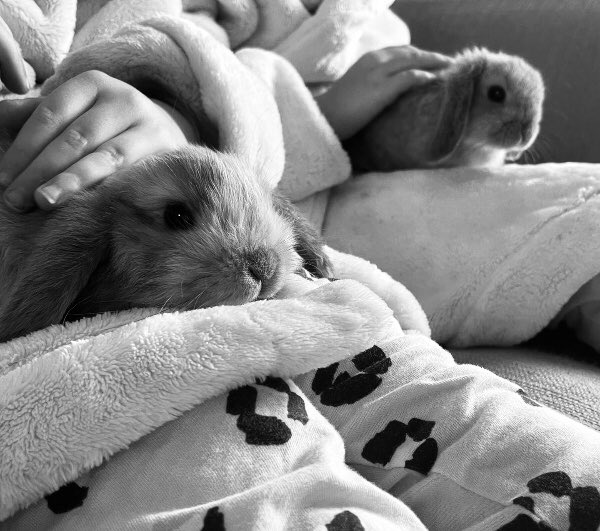 Our youngest grandchildren, the 4yo and the 6yo, recently adopted two baby rabbits, boys, who they’ve named Belle and Elsa! We always kept rabbits when the children were at home and latterly I kept one just for me. He was a black and white Dutch named Mylo, who sadly died, aged nearly 13, during lockdown, but he had a rather magnificent double-decker hutch and huge run so Belle and Elsa are now living a life of luxury.

Finally, I am starting to think of retirement, and I have a lot of plans. I want to research my family tree in more detail, I’d like to paint (no, Mr B, not the ceilings!), hopefully stick with my Duolingo Spanish, and travel more. I don’t think I’ll be able to persuade Mr B to go very far on an aeroplane again, in which case New Zealand and Australia are out, but I’m hoping we can get to see the Northern Lights one day if I can save up my pension!

So, here we are now, many, many years later, with four children and five grandchildren. I can hardly believe that our two oldest grandchildren are now 27 and 20, and we’re still crazy after all these years.